The African Scops Owl is smallest of the owls that are resident in Areena. In order gauge the size of this bird and put things in perspective it’s about the same size as an Olive Thrush.  Sexes are similar in size and weigh only 65g.  They vary in plumage coloration being either grey or a brown/grey with a light greyish front that is lightly streaked with black vertical stripes.  Their tails are very short which is uncommon among the owl species.  Owls use their tails as ‘rudders’ that allow them to change direction very quickly when hunting.

They have ear tufts that can be erected and moved individually allowing them to locate the source of a sound which could very well be their next meal.  The ear tufts are usually flattened when sleeping or when at rest and will be raised instinctively when alarmed. Although they can be active during the day they are predominately nocturnal and hunting for food is mostly done between dusk and dawn.  They generally forage on the ground. Their food consisting mainly of centipedes, woodlice, moths, dragonflies, grasshoppers, beetles, caterpillars, crickets, cockroaches, spiders, scorpions.  They seldom ‘hawk’ from perches and when they do they will catch small rodents, birds, geckos, skinks and frogs

The call of the African Scops Owl

The African Scops Owl are easily identified by their call, a very loud ‘kruup’ sound which is repeated in a sequence of 5 and 8 times.  They are most vocal as dusk falls with frequent calls between the pair while hunting.  Dawn calls are also made to enable the pair to establish each other’s whereabouts.

They don’t generally spend the daylight hours together except when breeding.  They are not choosy when it comes to selecting a nest. A hole in the top of a dead tree, a disused Woodpecker nest or even a hole in a rock face or building would be suitable.  Between 2 and 5 eggs are laid and incubated solely by the female. The African Scops Owl hatching between 22 to 4 days.  During incubation the female relies solely on the male for her food supply. The chicks stay in the nest for 2 to 3 weeks.  During this time they become fully feathered resembling the parents.  The chicks leave the nest when they are almost full grown. But are dependent on the parents for food for the next 3 to 4 weeks. After which time they fend for themselves. 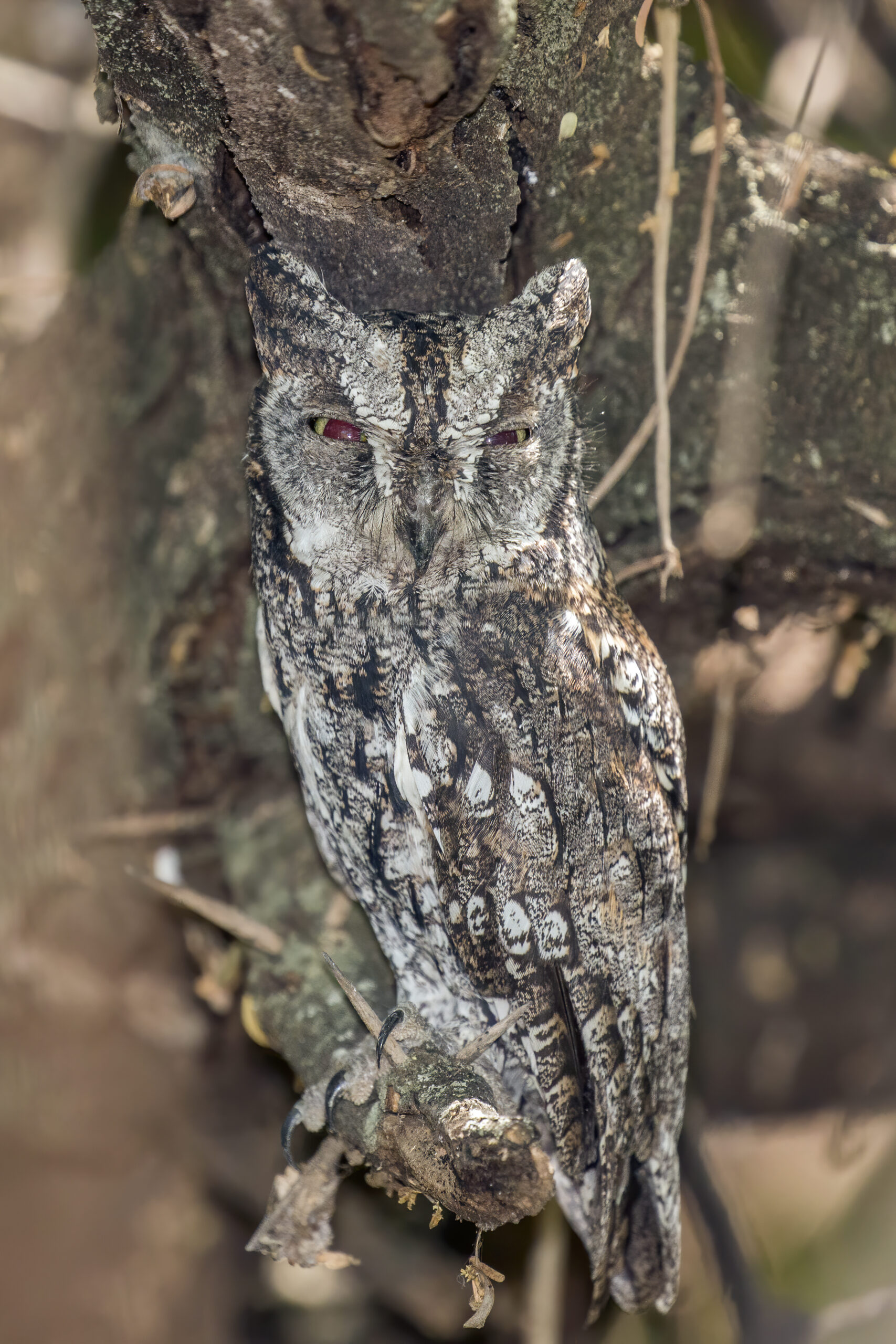