How the Acacia Tree can outsmart a hungry giraffe

Acacias are thorny trees with foliage that is bright green or bluish-green and has small blooms that may be creamy white, pale yellow or bright yellow. You will have seen many in the Areena Game Reserve and in the Eastern Cape as a whole.

These trees only live for 20 – 30 years. The acacia trees are able to tolerate extreme drought conditions due to their long sturdy root system that access deep ground water. They are an important food source for many large herbivores – especially Giraffes.

Giraffes are herbivores, which means they eat plant material like leaves high in the trees, and they can eat up to 29 kilograms of acacia leaves and twigs daily. However the acacia trees have developed a few defensive mechanisms to ensure their survival from the hungry giraffes and animals that like to chew on their leaves and twigs.

First of all, some species of acacia have large sharp thorns of up to 10 cm long. But giraffe have evolved to deal with these sharp thorns and it comes in the form of a large tongue. The giraffe tongue is about 45 cm in length and is able to grasp the branches and pull the leaves off around the thorns. They also have hardened palettes and thickened lips to protect from the thorns should they get munched.

The acacia trees have a further defence system to the thorns, the release of tannins, which taste terrible to Giraffe, so they stop eating them. This system is so effective that trees in the vicinity react to the trees tannin release and they too start to release their own tannin which forces the giraffe to move on, or go up wind to trees that have not sensed the tannin being released by the neighbouring trees.

The third defence mechanism the trees employ are actually the stinging ant, by allowing them to create living quarters with in the trees thorns, which the ants hollow out. The ants live off the sweet nectar produced by the tree and in turn the trees are protected by the ants who sting any animals that attempt to eat the leaves.

So with all these obstacles that the acacia trees use to protect themselves, it is a wonder the giraffe get to feed at all. 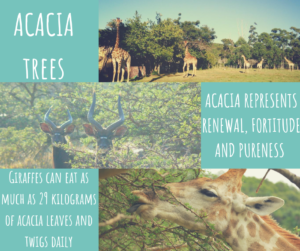