This month we focus on two of the larger birds that are common to Areena Riverside Resort.

The first is the Trumpeter Hornbill, easily recognized by the contrasting black and white plumage and very large ‘horn’ on top of its large bill.

It also has a very loud, and sometimes disturbing call – described in Roberts Multimedia as a “Loud nasal wailing nhaa, nhaa ha ha ha… like a crying baby.”

Their diet is varied but consists mainly of the various indigenous fruits that are available during the seasons, wild figs, berries.  They will also eat alien fruits such as pawpaw, guava, bananas and nuts when available.

Insects, bird eggs and taking fledglings from the nests, particularly weavers in Areena also form a substantial part of their food intake. 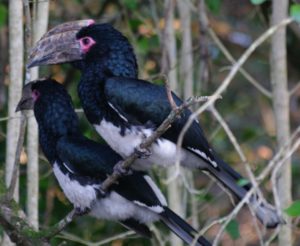 The breeding habits of these birds are also rather peculiar.  The pair will seek out a crevasse or hole in the trunk of a tree in which to build a nest during the summer months. Once the female is ready to lay eggs, she enters the chosen nest site and the male systematically seals the entrance with mud leaving an elliptical slit, about 150mm long and 50mm at the widest section.  The female then plucks her wing and tail feathers and lays between two and four eggs.  She stays in the nest for 11 to 13 weeks. The male, on the other hand, is responsible for providing her and the offspring with food through the slit during her incarceration.  Once the fledglings are ready to leave the nest, she breaks the mud away and emerges with a new set of feathers.  The fledglings leave the nest after a week and join the adults on feeding expeditions.  The family will often join with others and form small groups until the next breeding season when the pair become solitary and the male becomes protective of the breeding site. The Crowned Hornbill is much quieter than its cousin, the Trumpeter Hornbill and is smaller in stature. Its colouring, although similar to its cousin, is not black but rather a sooty brown, both sexes have similar markings. The horn, or casque, is red or dark orange and is not as pronounced as other hornbills.

Its call is a series of whistling notes rising and falling, it also throws its head skyward towards the end of its song.

Breeding and nesting arrangements are the same as those of the Trumpeter.

It also eats a wide range of small animals including termite alates, beetles, caterpillars, millipedes and grasshoppers, lizards, chameleons and even a golden mole if available.  It will also eat frogs, toads and large spiders if on offer.

Crowned Hornbills have a sociable nature and are usually found in pairs or small groups mainly in the forest canopy. Their flight pattern is of a ‘Floating’ nature with buoyant, dipping between trees or patches of forest, often in a ‘follow-the-leader’ fashion.