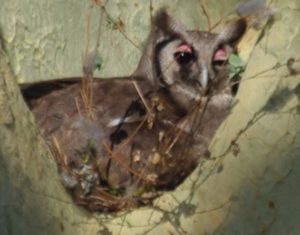 Areena has been most fortunate of late with the visit by a pair of Verreaux’s Eagle Owls (previously known as the Giant Eagle Owl).  They usually prefer a drier climate, nevertheless, nature is not contained by man made boundaries and they may venture into this region between the months of November and May.  These huge nocturnal birds give themselves away with a very deep grunting ‘hok-hok-hok’ sound made mainly during the dark hours.  The female has a deeper note than the male and the pair will call and answer each other when hunting.

As is common with most of ‘raptor’ species, the female is 30% heavier tipping the scale at 2 – 2½kg and is 10% larger than the male often reaching 65cm in height.

One of the distinguishing features of this owl is its ‘pink’ eyelids and heavy black eyelashes.

It also sports pointed ‘ears’ that can be moved independently from each other in order to capture sounds.  Like most other owls it can also rotate its head through a full circle and is able to see backwards without having to change its body position.  The nest is usually a rough construction of sticks and twigs made in the ‘V’ of a tree.  It will often use nests borrowed from other birds like Hadedas, Hamerkops or even on top of a Sociable Weaver’s nest.

Two eggs are normally laid and incubation, lasting up to 40 days, is done solely by the female with the male staying in close proximity of the nesting area.  The female will leave the nest occasionally to drink.  She is, however dependant on the male to supply her with her daily food intake which is in the region of 100/200g.  These owls are not very fussy when it comes to diet and its prey can include other owls, roosting birds, ducks, bushbabies, mongoose, fruit bats, rodents, lizards, gecko’s and even flying ants when available.  They will often leave their daylight roosting place to feed on the remains of the previous night’s meal.

As is the norm with birds of this size, only the first hatchling is raised, the second dying of starvation.   The chick takes to the air after 3 months on the nest and starts to hunt 3 months after fledging, remaining in the parental territory.  It stays in close proximity to the nesting site between 1 and 2 years, begging from the parents to supplement its food intake.   The young becomes independent when its parents decide that it’s time for the next breeding cycle to commence and it is forced to leave the area.