Our bird this month is the Greater Honeyguide. This bird is shrouded in myth and folklore and is reputed to guide humans and certain animals to wild beehives.  The locality of beehives is known to these birds that wait for a potential ‘hive robber’ to pass by. The bird then starts calling ‘whit-purr, whit-purr’, repeatedly, while perched to attract attention.  It then flies off with an exaggerated, undulating flight pattern for up to 40 m to the next perch, where it waits for the person to catch up. This process is repeated until the beehive is reached.

If the potential ‘hive robber’ loses the Honeyguide, it will turn back and repeatedly try to encourage the person to follow it.  On reaching the beehive its position is made known by the bird by subtly changing its behaviour and call.  If the bees can be persuaded to part with some of their prized possession, the bird expects to be rewarded with some honeycomb, they are particularly fond of the wax.

Both males and females are known to conduct this peculiar behaviour.

Of the three species of Honeyguides that occur in the Areena area, it is only the Greater Honeyguide that is known to lead humans, baboons and honey badgers to the location of hives in the wild.  It has also been established that not all Greater Honeyguides conduct this behaviour – the possible reason being the change over the millennia from humans being ‘hunter gatherers‘ to supermarket shoppers where honey is available off the shelf.

The male of this species is easily identified by being one of the very few birds that has a pink beak and its unique call that can be heard from a considerable distance.  The female sports a black beak and is lighter in colour and does not have the white ear coverts of the male.

The male of the species is very territorial and once he has established his ‘patch’, he will defend it aggressively.  These birds don’t make their own nests, they are parasites and favour the nests of barbets and woodpeckers in which the female will lay her eggs.  The young Honeyguides, generally two, are raised by the host birds.

Honeycomb wax, bees’ eggs and lava, although being their favourite food, is generally not the main source of this bird’s diet.  Their daily diet is made up of ant lava/eggs, beetles, spiders, worms, invertebrates, etc. 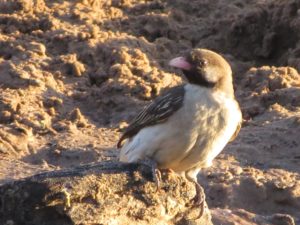