Areena has been blessed with an abundance of nesting birds during this Yuletide season. There are a number of breeding sunbirds, flycatchers and other species currently available for the avid birder to observe and record.

The untidy nests of Spotted, Dusky and Collared Sunbirds are to be found in various localities in the Resort.  Sunbirds are not among the craftsmen, like the weavers, when it comes to nest design. The nests of Sunbirds are built solely by the female over a number of days. She will collect coir from palm trees, lichen, dry grass, down, animal hair, bark fibre and bind them together with spider web. The inside of the nest is lined with plant down and soft feathers.  The nests are suspended from low hanging branches of trees, sometimes in very close proximity to human habitation.  Incubation of the young is the responsibility of the female. The male, being territorial, will stay close to the nest and will, on the odd occasion, bring her a tasty morsel.

Spotted, as do most other Flycatchers, build open cup shaped nests using dead leaves, moss, lichens, dry grass, creeper tendrils, spider web and feathers.  The inside of the cup is lined with feathers or hair.  Both male and female Flycatchers contribute materials and build the nest together, sometimes way in advance of the egg laying and incubation, which is the sole responsibility of the female.  The male will provide the female and offspring with food while protecting his family.

Southern Black, Ashy, Fiscal, Dusky, African Paradise, Blue-mantled Crested Flycatchers are to be found and may well breed in the Resort.

A pair of Knysna Touracos (previously Lourie) built a nest among the creeper vines in the top branches of one of the thorn trees in Round the Bend. The nest, built by both partners, is constructed of thin sticks arranged to form a 200 to 300 mm depression in the middle. Two chicks were raised by both parents, one falling from and being returned successfully to the nest just prior to fledging. This story has a sad ending, as both fledglings, while on their first flight, landed in the river and drowned.

There are, no doubt, many other species of birds currently breeding, feeding or raising young in Areena and if one were to be observant, you could be well rewarded. 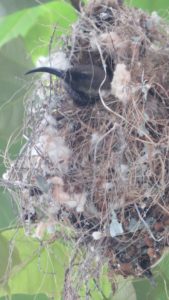 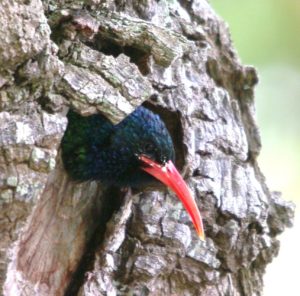 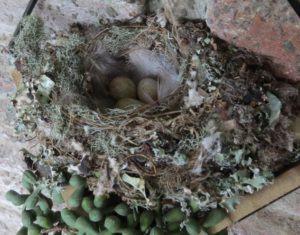