The past few articles of the Areena Birders Corner have focused on a few of the large species of birds to be found in the Resort.  This month we will turn our attention and focus on one of the smaller species, the Red-capped Robin-Chat.  Just a note to avoid any confusion about this bird’s name.  Those responsible for the ‘management’ of birds in South Africa belong to a world wide group of similar minded organisations.  In order to reach commonality throughout the ornithology community about the bird names, every few decades meetings are held to make sure that ‘birders’ speak the same language when identifying birds.

This bird is easy to identify for a number of reasons.  Sexes are similar having very bright yellow/orange underparts, powder blue wings and upperparts.  It also wears a russet brown cap on its head and makes a lot of noise.  It has a variety of calls made during various times of the day.  During dawn and dusk a pair makes a guttural ‘gurrrr’ and is very often the last to call before total darkness.  A soft ‘see-saw, see-saw’ call may be made after taking a bath, while preening itself or on any other occasion without reason.  Other calls are a jumble of melodious notes reminiscent of a child who is in process of learning to whistle as well as mimicry of many other birds.  It has also been known to mimic the yapping of dogs.

It feeds mainly on insects, beetles, ants, moths and caterpillars foraged from the undergrowth and thickets which is its main feeding habitat.

These birds are not shy and are used to interaction with humans.  They will very often befriend campers who are in the habit of leaving tit-bits within their easy reach. Small pieces of cheese, cold meat, bacon, egg, bread etc., will be readily eaten if made available.  They will also pick pieces of meat from braai grids once they have cooled down.

Their nests are constructed from bits of tree bark, lichen and other pliable materials woven into a small cup 1 ½ m from the ground. Two to four eggs are laid. 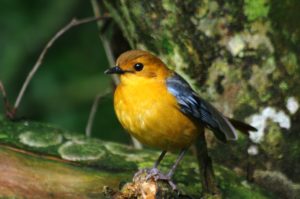