This article focuses on some of the yellow birds that may be observed while peering through binoculars in the Areena Riverside Resort during the summer months.
Why the summer months?
It is one of the quirks of nature that many species of birds change clothes during the summer breeding months and the winter months; hence they may appear somewhat confusing during these seasons. Fledglings, juveniles and immature birds may also not resemble their parents until they have reached maturity. So remembering transitional seasonal stages, breeding seasons and those growing up, let’s shed some light on the yellow fellows.
Weavers make up the bulk of the yellow birds that are found at Areena.
There are four species that breed, communally, in the palm trees along the river at the entrance of Round the Bend (RTB).

Spectacled Weaver: This bird is identified by the distinct black stripes that start at the eye and taper off toward the back of the head.  This eye stripe is more prominent in the male, who is also a much brighter yellow colour than his female partner.   The nest of the Spectacled Weaver is also very different from his cousins by having an extended ‘funnel’ or tube at the entrance hole.  The male is often seen ‘displaying’ at the nest entrance.  The display appears as if he is shivering rapidly while hanging upside down and making the typical weaver screeching sound. 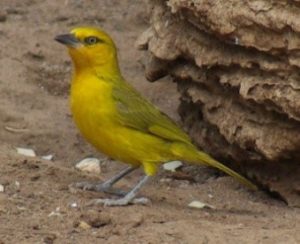 Cape Weaver: This Weaver is identified by having a white eye and pinkish coloured legs.  The male develops a brown/red colouring on his head and throat during the breeding season which sets him apart from the female who is much the same colour yellow throughout the year.  The nest of the Cape Weaver is very neat being more finely woven and round than those of the other species. 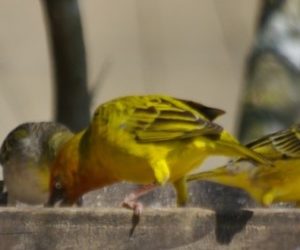 Spotted-back Weaver: This bird was previously known as the Spotted-back Weaver which was attributed to the very distinct spots or blotches on his back and flanks.  Village Weavers have red eyes and grey/black legs and are slightly larger that the rest of the species.  They also ‘bully’ their fellow weavers when feeding and bathing and are generally more vociferous.  There nests are somewhat larger and more untidy than those around him. 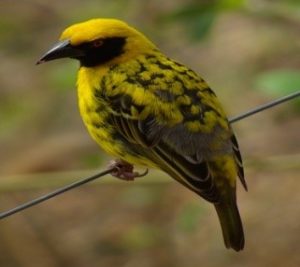 Southern Masked-Weaver: This is the most common weaver to be found in the region and may build his nests apart from those mentioned above, however, in palms at RTB he has decided to share with his fellow species mentioned above. This weaver has red eyes and red/pink legs and wears a black mask on the front of his face which extends from behind the eyes and forehead down his chest forming a ‘bib’. The pecking order amongst males is determined by the size of the bib, the bigger the bib the more females and generally the higher the nesting branches. 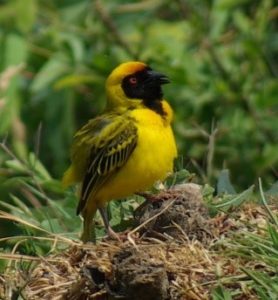 Yellow Weaver: This weaver is smaller in size than those mentioned above it is, however, a much brighter yellow colour than those mentioned above.  It is also known as the Eastern Golden Weaver among twitterers and is identified by its very red eyes and pink feet with no other identifying markings. It does not build communally with other weavers and its nest is suspended between two twigs over land or a few reeds woven together when built over water which it usually prefers. 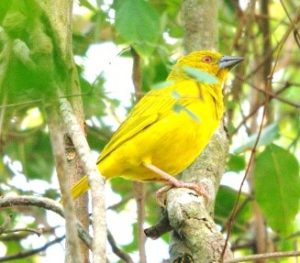 Dark-backed Weaver: There is another yellow Weaver found in Areena that does not associate with the above birds, in fact it is very different in many ways. For one, seeds do not form part of its staple diet as with other weavers, it is more at home foraging on tree trunks for bugs, beetles and other tasty morsels.  It has a melodious series of notes that it sings compared to the rasping, wheezing, and chattering noises made by the others of his species.  His nest is also hard to find among the tree branches and is constructed of lichen and vines instead of palm fronds. 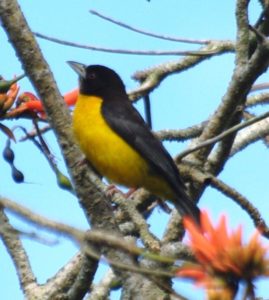 And now for the super star of the Areena yellow birds selected for this article.

Black-headed Oriole: This magnificent bird is medium sized with a bright red beak attached to a pitch black head that extends from behind the neck, down to the chest in front. The lower body is a bright yellow and the wings green with whitish grey stripes on the outer wing feathers.

Males and females wear the same colours throughout the year and are therefore easy to identify.

The call of this bird is a loud ‘Kleeeu” and a jumble of other melodious notes. The male stays close to the nest, a deep cup made of lichen suspended in the ‘V’ of tree branches, when breeding and often calls to his mate. 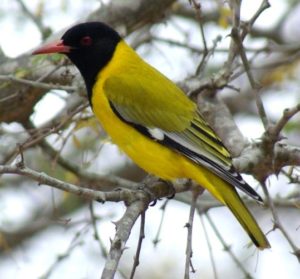