A Bird watchers program was held at Areena Riverside Resort over the Easter weekend. Dylan Rawlins organised the event and David Hoddinott  a leading international birding guide, lead us on the bird watch. The African record for the number of birds spotted on the continent is held by David. A total of 2163 on his list and over 6,200 birds internationally.

17  of us birding enthusiasts gathered at 06:15 on a very damp Saturday morning. The first bird, an African Goshawk, was spotted in the gloomy overhead sky making his repetitive territorial ‘tchick, tchick’ call even before setting off.

David  mapped out a circular route for the Saturday outing. We started at the parking area in front of reception.

Before leaving the starting point, 12 species of birds were observed. The route proceeded past the swimming pool moving along the road ‘Behind the Hedge’ (5 species) toward the clearing above Ablution 1 above ‘Round the Bend’. Yielding 9 species, including a Violet-backed Starling which is most uncommon to the region.

The next stop at the boat-trailer yard subsequently let to seven species spotted sunning themselves in the branches of a dead tree. We then stopped along the fence of the game park bordering the riverbank close to Carol’s stables. Here we say an assortment of waders, kingfishers and other water birds.

We then followed the road  up to the stables. Taking the path toward the ‘Bass Dam’ we ticked off a Red-throated Wryneck .  We were able to identify 5 more birds  in the area surrounding the dam.

We then moved along the Permanent Housing fence, and up past the touch farm, left down toward ‘BMW Park’ and after that Tony provided much needed refreshments at the end of the walk. The tally of birds we ticked off the Areena Birders List  came to a total of 51.

“We walked from the ‘BMW Park” up the hill towards the ‘signal towers’, around the small dam, past the school and down into the valley surrounding the ‘Big dam’. From the dam we walked up to the Abseiling Cliffs”.

We spotted a  total of 95 species during the 3 days.  David identified the calls of a further 5 species.  Brining up the weekend total to a rounded 100 species.

It’s David’s opinion that, overall, the bird diversity is very good.  A number of special birds recognized ‘nationally’ are easy to see in the Areena Riverside Resort.

We were lucky to have Special finds for the weekend which included the Half-collared Kingfisher, Black-crowned Tchagra, Cape Grassbird, Violet-backed Starling and two endemics, the Knysna Woodpecker and Southern Tchagra. 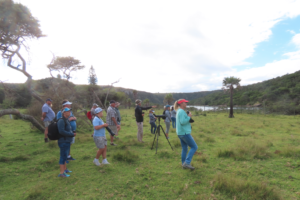